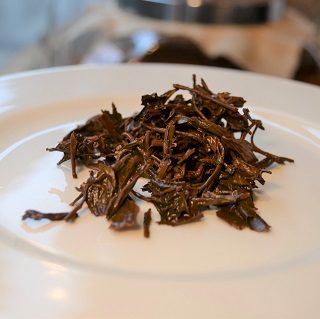 This month at Hebden Tea, we’re excited to be bringing you this special smoked Assam tea; the first of its kind.

A Brief History of Smoke

There a quite a few stories surrounding the use of smoke in creating teas, and with it the well-known Chinese example; Lapsang Souchong.
The most likely story, historically, is that during the Qing era there was a lot of unrest with armies and bandits constantly moving about the Wuyi Mountain area, which caused large delays to the harvesting and drying schedules of the local tea farmers. Add to this an unusually damp season and you have a recipe for disaster as the teas would not be ready on time to sell to the traders. To speed up the processing of the tea it is said that the farmers instructed their workers to dry the teas over fires made from with wood from the local pine trees. It is this fire that gave the tea its wonderfully distinctive aroma and flavour.

“Fu Soonga” is a new type of smoked tea that is made from Assamica leaves of the Camellia Sinensis plant, and is one of the first smoked black teas outside of China. It is made in much the same way as Lapsang Souchon but it is smoked with local Indian woods instead of the Chinese pine wood. The tea’s name is a combination of the words Fu (Blow) and Soonga (Cane), and is a reference to the traditional way of cooking foods by filling young bamboo canes with the food and placing them over open fires. In this case the smoke from the fires is blown through the bamboo canes and over the drying tea leaves. This imparts a smoke flavour that light and well balanced when paired with the aromatic smell and smooth taste of the Assam leaf.